The community’s “modern” history has been no less eventful; indeed, our very survival provides a living commentary on St. Paul’s question, “If God is for us, who can be against us?”–Rom. 8:31.

By the end of the last century, with the community’s buildings and morale in disrepair, it was clear that Petit Clairvaux needed to move if it was to have any hope of achieving permanence. But Divine Providence was watching and once again the Order came to the rescue. Notre-Dame du Lac had been founded near Montreal by Bellefontaine in 1881 and it is due to this community’s great charity that Spencer exists today. Consequently in 1899, Father John Mary Murphy petitioned the General Chapter of the Order to move the monastery from eastern Nova Scotia to the Diocese of Providence, Rhode Island.

The small community, accompanied by their livestock, arrived in New England in the summer of 1900, and regular monastic life was resumed on August 2. Their new home was a tract of some three hundred stony acres in Lonsdale, Cumberland Township, and the monastery was called Our Lady of the Valley since it was situated in Rhode Island’s Blackstone Valley. To the hardships of an entirely new beginning was added the rather puzzling news of 1906 that the community’s transfer, though formally approved by the General Chapter, had entailed the forfeiture of the abbatial status.

The monks were diligent and resourceful as they began once again to build a monastery. Progress was slow but deliberate. By 1902, they had erected an imposing front wing in which they lived and prayed for the next twenty-five years. (The monastic church would be finished in 1928; the Chapter and Novitiate wings in 1931 and 1937 respectively; and the large Porter’s Lodge in 1938.) The monks constructed all the buildings with pigeon gray granite they quarried on their own property. At the time the granite might have seemed an apt and comforting metaphor for the community’s future.

Dom John Mary died in 1913 and was succeeded by Dom John O’Connor (1864-1945), a monk of Petit Clairvaux who arrived via Oka where he had just been ordained. The monks on occasion had to cope with the exigencies of poverty and illness but despite this within about ten years the community had doubled in size, and by the time Dom John resigned his office, in 1943, they numbered eighty-four, Dom John laying down the burden of office after thirty years of wise and humble service, leaving behind the memory of a truly meek, silent and self-effacing superior.

In the middle of World War II, Dom Edmund Futterer (1901-1984) was appointed superior of Our Lady of the Valley and was elected abbot in 1945. Dom Edmund seemed to have inherited Father Vincent de Paul’s energy and vision, and the early years of his abbacy were filled with expansion.

After the war, there was a stunning resurgence of interest in the contemplative life, and numbers at the Valley and at other monasteries of the order throughout the United States, rose spectacularly – in 1948 there were one hundred thirty-seven monks in the Rhode Island monastery. Thirty-four monks and novices set out that year to establish Our Lady of Guadalupe near Santa Fe, New Mexico. This community, which celebrated its own anniversary in 1998, now lives in Lafayette, Oregon.

Meanwhile, Dom Edmund turned his attention to the introduction of the Cistercian (“Trappistine”) nuns into the United States. With the most generous collaboration of the then Archbishop, later Cardinal, Cushing of Boston, Mount Saint Mary’s Abbey in Wrentham, Massachusetts was opened on September 30, 1949. This flourishing monastery is already the proud motherhouse of three other communities in Iowa (1964), Arizona (1972), and Virginia (1987), as well as a contributor to a new monastic presence at the site of the medieval Cistercian monastery of Tautra in Norway.

On March 21, 1950, the Feast of Saint Benedict, the monks were reminded once again that the ways of God are not our ways. The abbey was ravaged by fire, and the devastation was virtually complete. The original wing was destroyed; the church was rendered structurally unsound and had to be demolished; and the Chapter wing needed extensive repairs. Once again, the community, numbering 140 persons, was homeless. 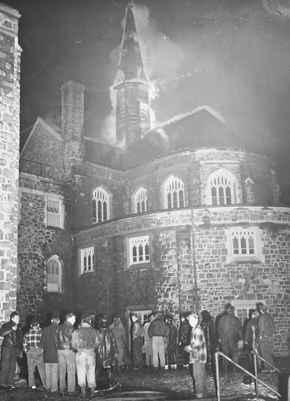 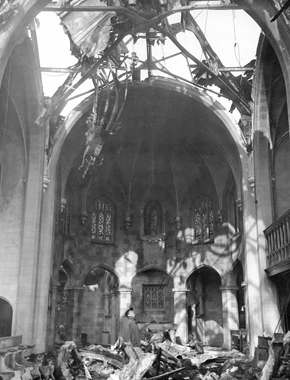 Our Lady of the Valley. Abbey church after fire, 1950.