The rigors of life at Petit Clairvaux were an obstacle to recruiting new members during the community’s early years. Looking to France for reinforcements, both Father Vincent de Paul and his confrere, Father Francis Xavier Kaiser, (1785-1862) made the journey home in 1836 and 1845, respectively. Alas, neither was successful.

Finally, however, in 1857, the Belgian monastery of Saint Sixtus responded to the appeal from Father Francis Xavier, who had assumed charge of Petit Clairvaux when Father Vincent died in 1853. Between 1857 and 1862 eighteen Flemish speaking monks left their home and adopted the rigors of a new land and language with the struggling community at Tracadie. The remarkable courage and faith with which these monks responded to the needs of Petit Clairvaux continue to move us and, more importantly, to challenge us.

The arrival of Father James Deportemont with the Belgian monks infused new life into Petit Clairvaux. Like their medieval predecessors, the community engaged in agriculture with imagination and industry and became, in time, a model for the whole area. The stability of the community was reinforced in 1869 when the monastery was officially affiliated with the Cistercian Congregation of La Trappe. At the same time, the Abbey of Gethsemani, which was founded in Kentucky in 1848, was designated as Petit Clairvaux’s “motherhouse” in which capacity it could be relied upon for fraternal oversight and support.

As numbers increased at Petit Clairvaux, Dom James Deportemont started another foundation in the Province of Québec in search of a more promising region for local vocations. Our Lady of the Holy Spirit in Langevein County survived only from 1862 to 1872 but nonetheless gave evidence of the attraction that monastic life continued to exert. Indeed, the Québec community itself established a foundation in Old Monroe, Missouri that lasted from 1867 to 1875.

In 1876, the monks elected one of the Belgians, Dom Dominic Schietecatte (1834-1919), as the first abbot. In 1882, the French monastery of Bellefontaine, which considered the founders of Tracadie to have been monks of their community, assumed the role of motherhouse. The community had taken root in Nova Scotia – by 1886 there were forty-five monks – and the struggle of three-quarters of a century appeared to have brought Father Vincent de Paul’s dream to fruition.

Then disaster struck. On October 4, 1892 the abbey church and the entire monastic quadrangle burned to the ground. Though none of the monks was injured, all the community’s possessions, including liturgical vestments, books and the archives were lost. The monks, with characteristic resolve, began to rebuild in 1894. However, an additional, major setback occurred in the fall of 1896 when the monks’ temporary quarters and barns were destroyed in another fire. Not surprisingly, these events exacted a heavy emotional toll. Dom Dominic, discouraged and ailing, resigned his office and returned to Belgium with several of the Flemish monks. Dom Antoine Oger, the abbot of Notre Dame du Lac, at Oka, Québec, was given charge of Petit Clairvaux and appointed Oka’s prior, Dom John Mary Murphy (1849-1913), as acting superior. Some members of the community were dispensed from their vows; others remained to work in the local diocese. By 1898 only twelve monks remained at Petit Clairvaux. At the time it would have seemed that Father Vincent de Paul’s ambitious venture had, simply, failed. 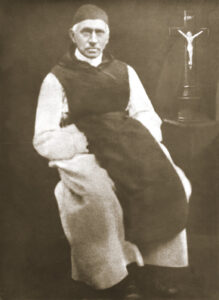 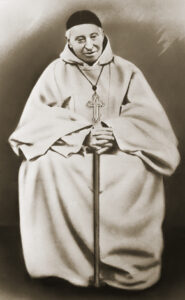