The postwar economic development of New England had significant consequences for the community. As the population in the area around the monastery increased, the monks needed to find a new location that would insure both their solitude and their economic stability. With this end in mind, in 1949 the community had purchased a large agricultural property, Alta Crest Farms in Spencer, Massachusetts. The 1950 fire merely accelerated the community’s projected move. And the end of one story became the seed for several new ones.

The monks set to work adapting the farm buildings for monastic purposes while using an abandoned Civilian Conservation Corps Camp in northern Rhode Island as temporary living quarters. Despite the austere living conditions, the community’s ranks continued to swell, and a new foundation was undertaken. Thus, on November 18, 1950, thirty-four professed monks and novices set out for Berryville, Virginia to establish Our Lady of the Holy Cross.

On December 23, 1950, eighty monks took possession of Saint Joseph’s Abbey, Spencer. During the Abbey’s early years, the growth of the community continued to be phenomenal. Ground for Spencer’s abbey church and quadrangle was broken on March 19, 1952 and hardly a year later, on August 15, 1953, the first Mass was solemnly celebrated in the new church. There were one hundred fifty-six monks in the community; the number grew to one hundred eighty-six by 1957. A third foundation was imperative, and property was secured on the western slopes of the Great Divide, in Snowmass, Colorado. The brothers who had been apprenticed in the building trades during the construction of Spencer were sent to the new site and had completed two wings of the monastery, dedicated to Saint Benedict, by November 21, 1958 when thirty-five monks from Spencer arrived.

In that same year the numbers were propitious for yet another foundation, and Dom Edmund seized the opportunity to introduce Cistercian life to South America. A group of monks, many of whom had contributed to the distinctive design and construction of both Spencer and Snowmass, set out for Argentina and established Nuestra Señora de los Angeles at Azul in the Province of Buenos Aires. This Spanish-speaking Abbey has grown steadily and continues to flourish. Spencer started another South American community, Nuestra Señora de La Dehesa, in 1960 near Santiago, Chile.

However, by the middle years of that decade, it became difficult for Spencer to continue to furnish personnel for La Dehesa. Subsequently, our sister-abbey in Kentucky, Gethsemani, assumed responsibility for this daughter house, which prospered and became a semi-autonomous Priory in 1970.

On August 1, 1961 Dom Edmund Futterer resigned after serving his community and his daughter-houses of monks and nuns with extraordinary vision and enlightened zeal for eighteen years, in an era of expansion and change. He will surely be recognized to have been one of the outstanding abbots of the 20th century for his material contribution but even more so as an eminent master of the interior life and a loving spiritual father.

Dom Edmund was succeeded by the superior of the Snowmass community, Dom Thomas Keating (1923- 2019). Dom Thomas’ abbacy coincided with the Second Vatican Council and its tumultuous aftermath. He resigned on September 10, 1981 after two decades in office spanning the troubled Sixties and the reappraisals of the Seventies.

Dom Thomas was succeeded by Dom Paschal Skutecky (1920-2000), whose term was brief due to poor health. Dom Augustine Roberts (1932- ), Titular Prior of Spencer’s daughterhouse in Argentina, became Administrator in June 1983, and then Abbot one year later in June 1984.

After two six-year terms, during which Dom Augustine oversaw the construction of a new Infirmary, he was succeeded as Abbot by Dom Damian Carr (1948- ) on June 17, 1996.

In August 1969, we were reunited with a number of our departed brothers when the remains of all those who had been buried at Our Lady of the Valley – including monks from Petit Clairvaux, Saint Sixtus and Notre-Dame du Lac – “Separated neither in life nor in death,” were re-interred in our monastic cemetery at Spencer. They now await the resurrection among their younger brethren. Their presence among us is a forceful witness of sacrifice and determination. In their lives – in our past – where we see God’s plan unfolding ceaselessly, we can also discern the architecture of our future and each day celebrate it with the Psalmist’s voice: He who dwells in the shelter of the Most High and abides in the shade of the Almighty says to the Lord my Refuge, my Stronghold, my God in whom I trust. –Psalm 90 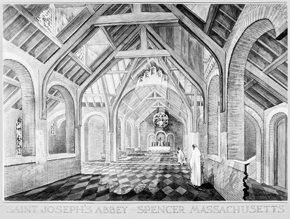 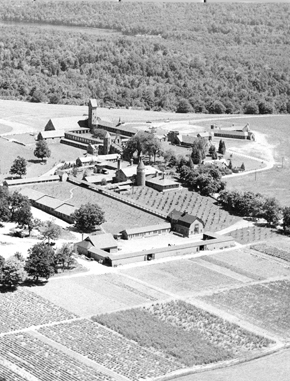