Looking further back in time, the beginnings of the Cistercian Order had as a point of departure the abbey of Molesme in Burgundy. Its abbot, Robert, early in his youth had entered the monastery of Montier-la-Celle near Troyes, and in the course of his career served as superior in two other monasteries. In 1074 he was made superior of a group of hermits and the following year founded for them the monastery of Molesme. In the course of time this new monastery prospered, growing into a complex institution with many material concerns. Robert began to feel once again the call of a more secluded life. In a first move, he went to share the life of another settlement of hermits but eventually returned to Molesme. Finally, with the support of a group of his monks, he made plans for still another move. In 1097 a project for a new monastery was put on a firm base by an appeal to Archbishop Hugh of Lyons, the papal legate in France, who gave his support. Early in 1098 Robert was able to set out with a group of twenty-one monks for a freehold property that had been given to them in an uncleared forest area about twelve miles to the south of Dijon. Here the founders hoped to live more faithfully according to the rule of St. Benedict. At first, the monastery was known simply as the “new monastery” but eventually took the name of the property, Cistercium or Cîteaux, which, in turn, gave rise to the name of the Cistercian Order itself.1 The monks changed their promise of stability to the new monastery, and Robert himself made his promise of obedience to the local bishop of Châlons-sur-Saône.

The work of clearing the land and erecting the first buildings amid inhospitable surroundings took its toll on the new community, and in little more than a year they were faced with a new crisis. Thanks to the intervention of the bishop of Langres the monks of Molesme were able to bring about the return of Dom Robert to Molesme. A considerable number of those who had come with him now followed him back to Molesme. It is possible that only eight monks remained at Cîteaux.

After Robert’s departure Cîteaux’s prior, Alberic, who had been an important figure in the founding group, was elected its second abbot in 1099. It was a critical moment in the history of the community, but under the more stable direction of Alberic the monks made a firm commitment to the work they had undertaken. During this period of consolidation, Alberic sent two monks to Rome to appeal to Pope Paschal II for the special protection of the Apostolic See. Assurance was given to them on October 19, 1100 in the bull Desiderium quod. The policy of soliciting support from Rome would be continued by Alberic’s successor, Stephen, who was elected abbot in 1108 after Alberic’s death. The new abbot, who had himself been a prominent member of the founders, was eminently suited to his pastoral role as father of the monastery. His range of activities also extended to such scholarly pursuits as providing service books based on authentic sources for use in the monastery.

In 1113 the monastery’s personnel was dramatically increased by the arrival of a group of young Burgundian noblemen, under the leadership of Bernard of Fontaine-lès-Dijon, who was destined to become the Order’s most famous son. This led to the foundation in the same year of a new monastery, Cîteaux’s first daughterhouse, la Ferté. Others would follow. By 1119 there were nine, and it became imperative to define just what the ongoing relationship of these foundations would be to the motherhouse. By this time the basic outline of a working solution had begun to take shape in a document called the Charter of Charity. This was now submitted with a request for renewed support, to the newly elected pope, Callixtus II, who earlier, as Archbishop of the ancient town of Vienne near Lyons, had come to know and esteem Cîteaux. Confirmation came on December 23, 1119 in the form of a papal bull, Ad hoc in apostolicae, which makes direct reference to the documentation that had been submitted to the pope: “Therefore, rejoicing over your progress in the Lord, We confirm with our apostolic authority those articles and the constitution, and we decree that everything remain ratified in perpetuity..”2

What is known today as the Carta Caritatis Prior seems to be the very document that was submitted to the pope in 1119.3 Here we find a form of organization in which the monasteries, while maintaining their essential independence, were nonetheless bound together by the common values expressed in their manner of life, and by the mutual control exercised by a “General Chapter” which met each year at Cîteaux and in which the abbot of each monastery had a voice. In the course of time the powers of this body would grow, and it would become more and more the determinative authority in the Order. As Cîteaux’s foundations grew to maturity, they in turn began to make foundations of their own, resulting in an increasingly complex network.

The arrival of Bernard and his companions initiated a period of spiritual flowering for the new Order. Not long after his novitiate Bernard himself was chosen as founding superior of the new monastery of Clairvaux. Over the years his prestige continued to grow, and he was called upon to undertake activities outside the monastery and indeed outside France itself. Thanks to the spiritual vision communicated by his preaching as well as by his writings, vocations continued to multiply, and new foundations spread over a wide area that included most of Europe, and beyond. The monastic culture of this new international generation of monks would be passed on to future generations by a host of writers that included, among others, William of Saint-Thierry, Guerric of Igny, Isaac of Stella, Aelred of Rievaulx, and Baldwin of Forde.

The Order continued to evolve throughout the centuries and is still, as it were, a work in progress.

1. The description of the Order’s history depends largely on the accounts of Lekai, The Cistercians and Bouton, Histoire as well as the more recent publication of the early texts of the Order in Waddell, Narrative and Legislative Texts.

3. Waddell (Ibid., pp. 264-273) has established that the collection in the form in which it was submitted to the pope in 1119 was the version that has come down to us as the Carta Caritatis Prior, save for a preface, index and chapter headings added around 1147 quite possibly by the third abbot of Cîteaux, Raynard de Bar. An earlier version (no longer in existence) would have dated from as early as the foundation of Pontigny in 1114. In the course of time this underwent elaboration to bring it into conformity with the evolution of the new Order, resulting in the Carta Caritatis Prior.

Above and below and throughout these pages: a selection of details taken from illuminated manuscripts produced in the scriptoria of Cistercian monasteries during the first decades of the 12th century. 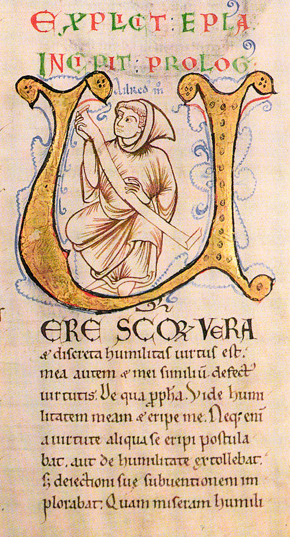 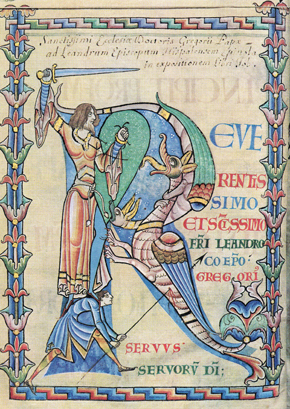