If music is the wordless expression of the human soul, then truly sacred music must be not only an aid to prayer, but prayer itself. Gregorian chant as the sung prayer of the Church is able to express the thoughts and feelings that are fundamental to prayer. Some attribute this to its haunting simplicity. For despite its occasional elaborate technique, there is never anything contrived or dramatic about chant to weary the listener.

Liturgy as sung prayer is the language of the heart. This language is not merely of an intellectual assent, but forms the sensibility and the very soul of worship. Gregorian chant expresses in a special way something of the timelessness of liturgy. The purity and contemplative aspect of chant help us reach out beyond our immediate conditions to the ineffable, the eternal, the mystery of divine beauty and truth.

Since the Cistercian Order of the Strict Observance began to reform its liturgy in 1969, the daily Offices have had a two-week cycle of psalmody. As arranged at St. Joseph’s Abbey, Sunday Lauds has the same psalms each week, corresponding to Week II of the Roman Office, with seasonal variations. The monks of Spencer began celebrating the liturgy in English almost forty years ago. A variety of musical styles is currently in use, but traditional chant predominates in both the Divine Office and the Mass. The psalm tones of Lauds (Morning Prayer) are composed on a simple accentual principle to suit the varying rhythms of English cadences. And the Hallel Psalm (Ps. 150) is on the Gregorian sixth tone.

The Vespers hymn to the Blessed Virgin Mary, O Quam Glorifica, was recorded by the schola of St. Joseph’s Abbey in the 1950’s.

1.  O how resplendent with glorious light,
royal offspring of David’s line,
O Virgin Mary, enthroned on high
high above all the citizens of heaven.

2.  You, a mother with virginal honor,
your heart’s sanctuary being chaste became
the court for the Lord of the angels
thence was born Christ, God in the flesh:

3.  He whom all the whole world adores with veneration,
to whom now every knee rightly bends;
with your help we implore from Him the joys of light,
with all darkness dispelled.

4.  Grant this, O Father of all light, in the name
of your own Son, in the Holy Spirit,
who lives with you in the shining heavens,
ruling and governing all the ages. Amen.

The Biblical theme of Jerusalem, the holy city of God, is one of the several motifs running through the Old and New Testaments. Connected in its beginnings with the historical city of David, it was to find its culmination in St. John’s vision of “the new Jerusalem coming down out of heaven from God, prepared as a bride for her husband,” (Rev. 21.2)

Laetare Jerusalem is the introit for the Fourth Sunday of Lent taken from Isaiah 66.10, 11. Looking forward to her Paschal joy, the Church invites her children, the children of the new Jerusalem, to rejoice in anticipation of the consolation of Easter. This introit was recorded by the schola of St. Joseph’s Abbey in the 1950’s. 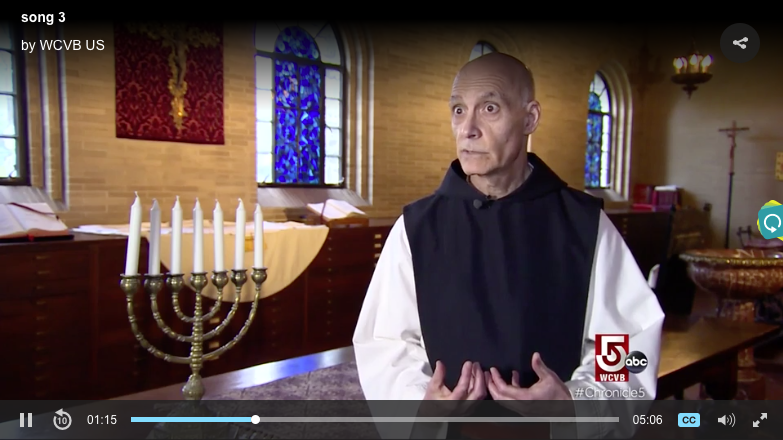